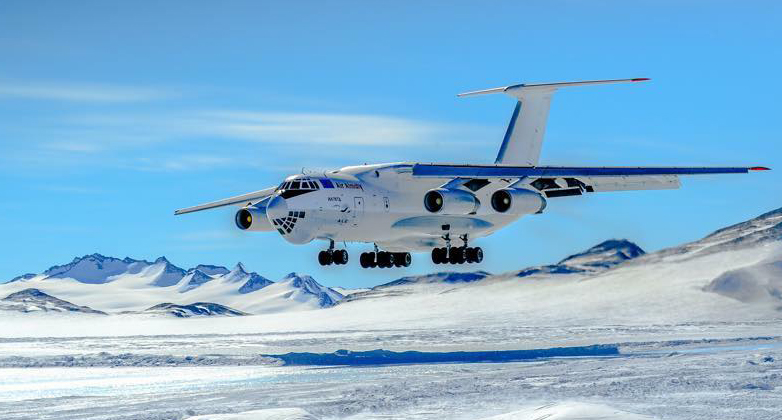 In this age of modern air travel, it is relatively easy for anyone with the means to book a flight to almost any corner of the Earth.

Unless that corner is Antarctica, a place where you cannot simply pave a runway and start landing planes.

Boarding the Russian cargo Ilyushin il-76 is like climbing into another world, a throw back to pre-cold war days. It’s an exhilarating experience knowing your that next foot on terra firma is going to be on the frozen continent.

Our destination was Union Glacier and the famous “Blue-iced runway”. The airport is operated by a company called Antarctic Logistics & Expeditions (ALE), who provide expedition support and tours to the interior of Antarctica

The runway is located approximately 5 miles from base camp (79.767° S and 82.867° W) and blue ice: dense, intensely blue glacier ice formed when snow falls onto glaciers gets compacted and recrystallizes.

It only operates during the months of November to January when the weather is the least hostile.

It is the only facility of its kind in Antarctica. It was certified by the Chilean Directorate General of Civil Aviation in December 2008.

I have been very fortunate to have flown in and out of Union Glacier over the past six years and without doubt, the thrill does not wane.