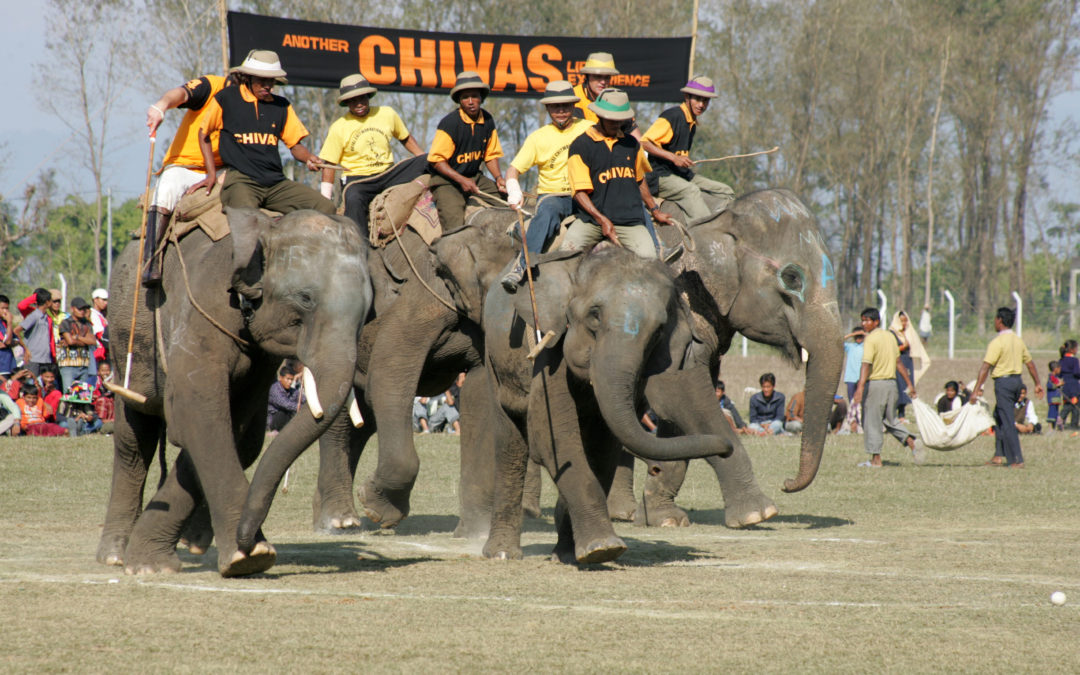 Firstly, let me explain a brief history of this sport – it‘s believed to have been played for many years on the subcontinent, but it wasn’t formalized as a “sport,” until 1982.  In a bar in St. Moritz where Jim Edwards, owner of Tiger Tops in Nepal, was having cocktails with James Manclark, a Scottish  landowner and former Olympic tobogganer. Manclark loved polo. Edwards owned elephants and a conversation developed.  Back in Nepal, sometime later, Edwards received a telegram from Manclark that read: “Have long sticks. Get elephants ready!” The rest as they say is history.

Play is similar to that of horse polo, with four riders per side, but there are some major differences. The field is far shorter, 100 meters long, compared with a 300-yard horse polo pitch also the games are brief, just two ten-minute chukkers. The elephants are organized into four groups and during the 15-minute break between chukkers, teams switch ends and elephants.

There are some rules: No more than three elephants per team can be in a particular half of the field at one time, and only one elephant per team may enter the 20-meter-deep semicircle zone around each goal. It is also illegal for an elephant to lie down in front of the goal. The elephants are “driven” by local mahouts, the player tries to communicate where he wishes to go – which is easier said than done, and considering that most of the mahouts and the elephants only understand Nepalese.

The tournament takes place over five mornings. No elephant may play consecutive games, and matches must be completed by noon, when the heat begins to set in. To keep the animals fuelled, sugar cane or rice balls packed with vitamins (molasses and rock salt) are given to the elephants at the end of each match.

To the outsider it seems absurd, if not cruel to force elephants to play polo, but having witnessed five World championships in Nepal, my experience is that at least there, these beautiful creatures are extremely well treated by their mahouts, who care for their elephant for life. The event raises significant funds for elephant welfare in Nepal and for less fortunate people living within the local areas and Tiger Tops, the host has played a pioneering role in conservation and anti poaching projects in Nepal.

I became an ‘Olympic Champion’ quite by accident – It was back in November 2009 and it was the last tournament that I covered, as the sponsorship was pulled the following year.

I had an assignment to film and produce World-wide News coverage for my client Chivas Regal and the Championships. That year the location in Nepal had changed and we were heading to Karnali Jungle Lodge instead of the usual Tiger Tops jungle camp. Flights and transportation were a little trickier – unfortunately one of the players for the Chivas team had missed his flight and wouldn’t be able get there for a few days. Cutting a long story short – I was asked to make up the team. I duly accepted. 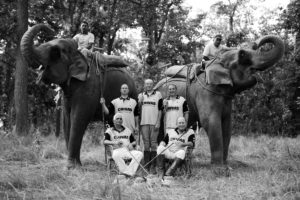 I had a taste of Elephant Polo in previous tournaments in the fun guest match, but not actually for a team. So I was ill prepared but the World Elephant Polo Olympic Quaich Title was in sight.

My team had the world’s best elephant polo players with prolific goal scorer Peter “Powerhouse” Prentice as well as  Raj “the Silver Fox” Kalaan, a former star of the Indian national polo team and a colonel in the world’s last mounted regiment plus British expat and business man Geoffrey Dobbs, who was also an accomplished player.

Heralded as one of the finest matches of the tournament, Chivas representing Scotland, started well with Peter Prentice scoring 4 goals in the 1st chukka for the Scots to lead 5-3 at half time. The UAE’s Fosroc Sepoys then came back hard in the final chukka, cutting the deficit to a single goal with 4 minutes left to play. The UAE team did all they could to get level, but Chivas Scotland hung on in gallant fashion to celebrate their first ever WEPA Olympic Gold Medal victory by 5-4.

This certainly ranks as one of my treasured experiences, but I have to say it’s the gentle giants of the Jungle who always prove to be the stars of the show, deservedly so!

Elephant Polo is registered as an Olympic sport with the Nepal Olympic Committee; however it is unlikely to be included in the Tokyo 2020 Olympics or indeed anytime soon.